Welcome to Old Fashioned Recipes. Many of these delicious recipes have been in our family over 80 years. 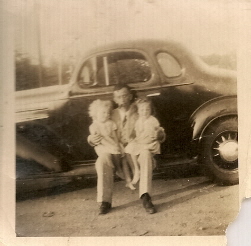 Mama got up before daybreak and started a fire with wood kindling in our wood burning cookstove.

She made sure my twin sister and I had breakfast before boarding school bus.

There was no boxed cereal in our family. Mama loved her family and she loved to cook.

She got her Pumpkin Pie Recipe from a Good Housekeeping magazine in 1937.

Our family enjoys this delicious pie at every Thanksgiving dinner and throughout the year.

The Old Fashioned Banana Pudding recipe from scratch, came from my mother-in-law, who got it from someone who served it at a school picnic in the early 1950's.


The $100.00 Chocolate Cake Recipe (the original version) and others were ordered from a magazine ad in the late 1970's for twenty-five cents each.

I selected the recipes for this website for their best of taste and time-tested old fashioned recipes.

You will find that many of the amazing recipes on these pages will take you back in time, to fond memories.

Who doesn't remember Mama or Grandma, with one of their handmade aprons tied around their waist, beads of sweat on their faces from the hot cooking stove, skirting around the kitchen tasting and testing, this and that?

Who can't remember the aroma of their homemade Chicken And Dumplings simmering on the stove?

Or the tantalizing smell of their yeast rolls...  the taste that was like none other?

Then, there were the desserts. Oh, my!

They ensured their family had a perfect meal!

No wonder back in those days so many kitchens were called The Family Room.

What Are
Old Fashioned Recipes?

They are food formulas that favor or embrace the methods, styles, flavors and tastes of times past.

On this Website I bring you heritage recipes made from scratch (with few exceptions), that have been enjoyed for many years.

I want you to experience or have access to those recipes you might have had and lost, or wanted to try and didn't or simply never owned.

My wish is that you enjoy these Old Fashioned Recipes and pass them down to your family and friends as they were passed down to me.

First because they are so delicious.

Most of us will agree many of our fondest memories involve our loved ones gathering, cooking, eating and enjoying food.

Old recipes involved a lot of creativity back in the day.

Many supplies weren't available. They are now.


Some foods had not been discovered or created yet.

Some foods weren't available because they were located in other countries and not yet imported to the United States.

Some foods were rationed as sugar was during World War II, when demand for it was high and the supply was low.

Yet, people had to eat so they made do with what they had.

Creativity was high because of necessity and a desire for expression, as it is today.

The reason I developed this website of Old Fashioned Recipes was to keep that art alive!

I believe all  great recipes should be shared and passed down!

A Bit Of History For You

Most of the recipes on this website include my personal history with the recipe.

I have added a bit of history for you on some pages following the recipe, for your information and enjoyment.

This additional history is usually curated from research online or offline.

According to research, the first cakes were invented hundreds of years ago by the ancient Egyptians.

They were first called bread, not cake and were sweetened with honey instead of sugar.

They did not contain baking powder because it was not introduced commercially until 1856.

Our first settlers brought meat Pie Recipes to America and started making pies as soon as they got settled in.

They also brought apple seeds and apple seedlings to grow apples, but they used them to make apple cider, not pies.

According to my Banana Pie historical research, the pies took off in America's banana market by storm in the 1880s.

In 1908, a recipe appeared in The Blue Ribbon Cookbook by Annie R. Gregory, that called for bananas, milk, cornstarch, eggs, sugar and vanilla extract, more like our Banana cream pies of today.

It also had a beaten egg white topping instead of a top pie crust.

Enjoy your visit here. I hope this website will become one of your favorites.