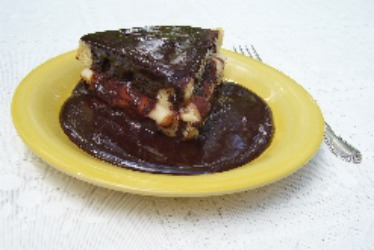 I first tasted this luscious dessert in 1953 in a restaurant a few doors from F.W. Woolworth's dime store, in Greensboro, North Carolina.

It was called "Hot Fudge Cake".

Then he poured Hot Fudge Sauce from a teapot over the cake.

In 1963, I made a Boston Cream Pie from a new recipe in my new cookbook.


It tasted just like that Hot Fudge Cake I had enjoyed so many years ago.

Here is my delicious recipe.

I hope you enjoy this classic dessert.


Mix and microwave per instructions Coconut Cream Pie except this usually needs only 5 minutes to cook because it is a pudding instead of a pie.

Cool and chill in the refrigerator for at least 2 hours before filling cake.

Filling may be cooked in saucepan on top of stove.

Mix together all ingredients except vanilla flavoring  in medium size saucepan and cook on medium heat, stirring constantly until thickened.

As soon as you see the first bubbles it should be cooked enough.

This filling should be soft and not as thick as a pie filling, but thick enough not to run.

It will get thicker as it chills in the refrigerator before assembly.

Put butter, milk, corn syrup, and cocoa in a small saucepan or skillet.

Place on low heat and stir constantly until butter is melted and mixture is smooth.

Continue cooking and stirring until mixture just comes to a boil.

Add powdered sugar a little at a time stirring after each addition until smooth and no lumps remain.

Assemble as soon as cake is done and removed from the pan.

If cake has been allowed to cool, reheat in microwave about 25-30 seconds.

Place bottom of cake layer on serving plate with cut side up.

Top with the cold pudding.

Place second layer on top of pudding with cut side down.

Pour or spoon Hot Fudge Sauce on top. Cut in wedges and serve.

Note: Cake can be cooled at room temperature and refrigerated to serve cold, if preferred.

Cake can also be cut into wedges and individual slices be assembled as needed.

My Fannie Farmer's Cooking-School Cook Book (1947) has a Chocolate Filling Recipe as a variation.


I have not tried this variation because I think the contrast of the cold vanilla filling with hot chocolate flavor is what makes this classic cake.

In the Vanilla Custard Filling Recipe above, increase the sugar from 2/3 cup sugar to 1 cup.

A Little History For You

M. Sanzian, a French chef who was working at Boston's Parker House Hotel is credited with creating the recipe in 1856.

A similar recipe for a Pudding Pie Cake that was topped with powdered sugar had appeared in the New York Herald newspaper in 1855.

Sanzian had added a Chocolate Glaze on top.

This cake was named the official Massachusetts State Dessert in 1996.