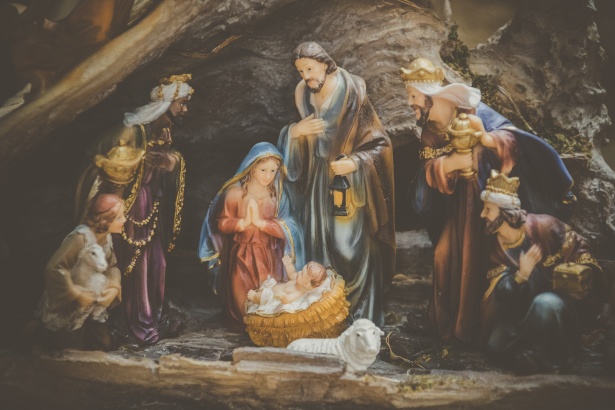 We celebrate Christmas In America History on December 25th each year.

Many of us celebrate by giving honor and praise to Jesus in a formal place of worship and/or a feast of spectacular foods.

We also celebrate the birth of Jesus by giving gifts as did the wise men coming to pay tribute to Jesus, the newborn Mesiah.

Our way of celebration has evolved thru the ages.

No one knows the exact date of Jesus's birth.

It is estimated that he was born in the years 6-4 B.C.

The Bible says He was born in Bethlehem of Judea, in the days of Herod, the King. (Mathew 2:1) King Herod died in March 4 B.C.

The first mention of the date we now claim, December 25th was on a Roman Calendar, 336 A.D.

The people in Europe held other mid-December festivities celebrating the end of harvest.


They celebrated with special foods, decorated their homes with greenery and sang special songs.

Some historians speculate that was the reason that particular date in December was chosen.

The First Christmas
In America

The first documented Christmas celebration in America was in Saint Augustine, in Florida in 1565.

The first Christmas in the English Colonies was celebrated by a band of only 40 Englishmen huddled together on Christmas morning in 1607, who had survived the diseases, lack of food and Indian attacks, out of 100 settlers.

In 1659 celebrating Christmas was banned by the Massachusetts Bay Colony.

They made celebrating Christmas, in any fashion, illegal.

The Puritans, or Protestant Christians, thought all the merrymaking was a sin and offended God.

So anyone caught celebrating that holiday in any minor way, was fined five shillings.

The ban lasted until 1681 when political authorities forced the colonists to repeal the law.

The religion I grew up with, of which my Grandfather was the preacher, in the late 1930s through 1950s thought merrymaking was a sin, referring to it as an "abomination" unto the Lord.

Musical instruments were not allowed in our churches.

But, unaccompanied, praise  songs were.

They were all sung in the same monotone (out-of-tune) voice.

Interesting: Out-of-church, pianos or organs were fine to play.

Second Half Of the Seventeenth Century

In the second half of the seventeenth century, the Angelicans of English decent, in Maryland, Virginia and the Carolinas began celebrating Christmas as they had known in their homelands.

They celebrated by feasting on fabulous foods, drinking, dancing, cock fighting, playing cards and other games.

Even though the local churches offered Christmas worship services there was little interest in their Colonial Christmas celebrations.

Wealthy plantations owners celebrated Christmas by hosting a large feast including those less fortunate being invited, including servants and slaves.

Beat the whites until they are stiff.

Beat egg yolks and sugar together until light and foamy.


Slowly stir in the Brandy to "cook" the raw egg yolks.


Stir in milk and cream.

Sprinkle each serving with grated nutmeg, if desired.

A couple of days before Christmas in 1826, a few Cadets smuggled ingredients to make spiked Eggnog into their barracks at the United States Military Academy in West Point, New York.

After the loud drunken party which including loud signing, at about 4:30 am on Christmas they got caught.

Some were already drunken or asleep.

The encounter lead to a bloody riot and 70 Cadets, about one third of the them being involved.

A window pane was knocked out and a gun fired.

As a result Six Cadets resigned, 11 were dismissed, 19 were court marshaled and one was charged with attempted murder.

Jefferson Finnas Davis, who later became the President of the Confederate States of America was in attendance, but was not charged.

After the Revolution, the newly established American government revoked all British holidays, including Christmas.

In 1836, Alabama was the first state to declare Christmas a legal holiday.

Louisiana and Alabama made it legal in 1038.

Shortly thereafter, one by one, other states followed suit with the last state to declare it a holiday, Oklahoma in 1907.

Then in 1870, because a large number of states were already observing Christmas a bill to make Christmas a legal holiday was approved and passed to the Senate on June 24, 1870.

When the wording was approved by both houses it was passed on to President Ulysses S. Grant who signed the bill into law on June 28 to make Christmas a legal federal holiday on December 25th.