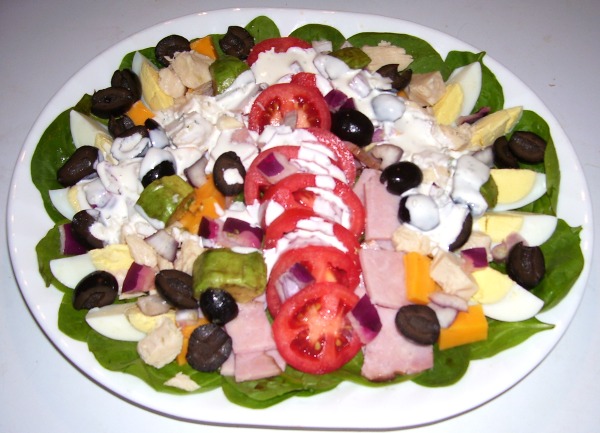 Cobb Salad Recipe makes a beautiful, delicious salad for your family and friends.

Many folks declare it is the best salad they have ever tasted.

First is the recipe I adapted which my family likes the best.

The second one is the original version, according to my research.

Both versions can be served as a side for any meal or alone as a light luncheon.


Arrange spinach leaves on a salad serving plate or in a salad bowl.

Prepare the other ingredients the way you like them and arrange on the salad.

*Avocados turn brown quickly after peeling because of getting oxygen to the surface.

It is best to prepare them last for your salad and just before serving.

There are many tips online to prevent avocados from turning brown after being cut.

The only method I have found that works is to cover them with salad dressing and place in an airtight container in the refrigerator until used.

I find they will last a couple of days, but need be eaten ASAP.


Mix together sour cream and mayonnaise until creamy.

Slowly, whisk in the buttermilk until it is the consistency you like. (See tips below).

Pour into a salad dressing container or glass jar.

Cover with lid and refrigerate 8 hours or overnight.

This allows enough time for the onion flakes to hydrate and all flavors to permeate for an awesome Homemade Ranch Style Dressing. 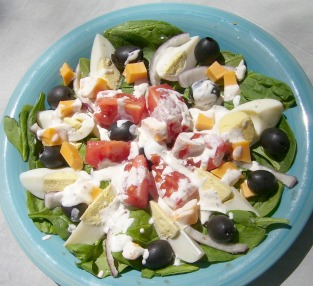 The above image is of a salad made using the first Cobb Salad Recipe, but eliminating the chicken and ham for a lighter meal.

Did you know that whole buttermilk thickens as it ages in your refrigerator?

You may need to add extra milk to recipes when making salad dressings, Buttermilk Pancakes, etc. to compensate for the increased thickness.

History Of Cobb Salad Re

Cobb Salad is an awesome, yet simple dish, created in the 1920s or 1930s, depending on which story is true.

One story is that the owner and operator of the Brown Derby restaurant in Hollywood, California, Robert Cobb, got hungry late one night after his restaurant closed and started putting together something he could eat.

As the story goes, he put together some leftovers, including  several types of salad greens (listed below), then added the other ingredients and his restaurant made, French Salad Dressing.

It seems he served a friend the salad also. The next morning the friend returned to the restaurant requesting some more of that Cobb Salad Recipe.

Hence, the salad bearing the owners name, was added to the menu.

Another story is that Mr. Cobb's executive chef, Robert Kreis, created it years earlier when the restaurant opened in 1929 and named it Cobb in honor of  it's owner.

A third story says the salad was on the menu at the Calestoga Inn as early as 1920.

They claimed the ingredients were written down as an old family favorite.

They also claimed they name it after a nearby mountain by with that name.

We probably will never know the truth.

But, my thinking is that the salad was inspired and created by whomever, from an old 17th century salad called Salmaguni.

It also contained anchovies, but no avocado, and an oil dressing.

Original Version Cobb Salad Recipe
As Far As I Can Determine

Mix all together except the dressing and add it when served.