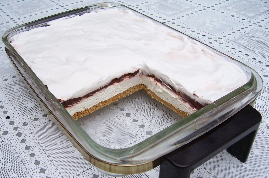 Cream Cheese Pie is an old fashioned recipe of cream cheese filling layered with instant chocolate pudding and butterscotch pudding in a butter pecan crust and topped with whipped cream.

The recipe is always requested when I take it to a potluck or family gatherings.

I have included a Cream Cheese Banana Split Pie recipe.

Make it with instant puddings and bananas.

Then drizzle the top with yummy, Homemade Chocolate Sauce.


Mix together flour, butter, and pecans until crumbly.

Bake in a preheated 350 F. oven for about 8 minutes or until just lightly browned.

Set aside to cool.


Mix together cream cheese and powdered sugar on low to medium speed in a mixer.

High speed whips too much air into the filling.


Fold in whipped cream and spread on thoroughly cooled crust.

Refrigerate and chill about one hour.


Mix puddings according to directions on package.

Spread on pudding layer and chill several hours or overnight.

Cut into squares and serve. 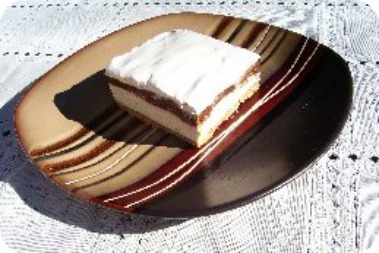 
Make crust per instructions above.

Bake and cool on rack in pan.

Arrange a layer of the sliced bananas on top of the Vanilla Pie Filling.

Sprinkle with Pecans and Cherries. Drizzle Chocolate Syrup over all.

Refrigerate several hours before serving. Refrigerate any left overs if you have them.

Return to Pie Recipes And Cobblers