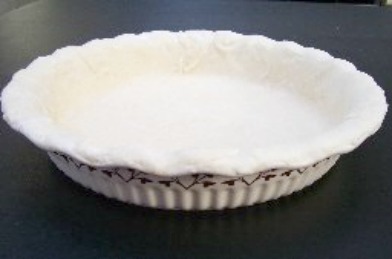 A perfect Flaky Pie Crust Recipe made from scratch produces a crust that is tender, tasty, and flaky, not soggy or greasy.

Included is a delicious Butter Pie Crust with a quick and easy side decoration.

Old fashioned recipes, made from scratch, handed down from generation to generation, used only flour, salt, fat and liquid.

That same recipe was published in my first cookbook in 1963, The American Woman's Cook Book by Ruth Berolzheimer, Director of Culinary Arts Institute.

The only difference in the ingredients list was that my book listed "all-purpose flour".

This recipe has a more detailed mixing method to help you achieve a perfect crust every time.

Do not substitute self-rising flour nor add baking powder or baking soda to the formula.

Lard is the better choice for flakiness and tenderness. It also pairs well with all types of pies, savory or sweet.

Some folks prefer the taste of butter crusts.

However, butter is not 100% fat and is more susceptible to producing a tough pastry or over browning in my opinion.

In my opinion they don't match the taste nor performance of other fats.

Water is the preferred liquid.

Milk or the addition of excess sugar can cause the crust to brown prematurely, reducing taste and tenderness.


How To Make A Perfect Flaky Pie Crust

Sift together flour and salt into a mixing bowl.

Add chilled lard and cut into flour with a pastry blender or two forks, until all fat particles are no larger than small peas.

Refrain from using your fingers at this step because they will provide warmth to the lard causing it to become too soft.

The best method to get the water into the flour is to sprinkle a tablespoon of water over 1/4 of the flour, mix it in lightly with a fork.

Then push the moistened flour to the side of the bowl and do the same with another 1/4 of the flour until all is moistened.

Use as little water as possible, but enough for the dough to clump together.

How much water you need often depends on the brand of flour you are using.

Cover and place in the refrigerator 10-15 minutes to allow the dough to hydrate.

How To Roll Out Flaky Pie Crust Pastry

Remove one ball of dough from the refrigerator at a time.

Place it on a pastry cloth or clean, smooth kitchen towel which has been dusted with flour (to prevent it from sticking).

Use a pastry cloth cover, dusted with flour on your rolling pin.

If you don't have a cloth, sprinkle a little flour on top of the dough ball.

Pat dough down with your hands to get a flat surface to start rolling on.

Begin in the center of pastry and roll out to the outer edge.

Lift pin and start in center again. Roll in opposite other direction.

Do this until you have a round circle about 1/8 inch thick and about 1 1/2 inch* larger than the diameter of your pie pan.

Roll exercising light pressure. Refrain from rolling back and forth all over dough. It makes it tough.

As you roll if it becomes sticky, add only enough flour to prevent this.

You can periodically lift the edges as you go to see if it starts to stick to the cloth.

*The 1 1/2 extra inch is to accommodate the depth of your pie baking pan.

If it is deeper than 1 inch roll to the extra measure needed.

There are three methods to transport your pastry from the cloth to the pie pan.


Choose the one you prefer.

Gently roll the crust up on the rolling pin. Carry it to your pie plate and unroll it and center it.

Fold your Flaky Pie Crust in half or in fourths.

Lift it up with your hands and place it over your pie pan and unfold, centering crust.

Clean excess flour or anything else around pastry cloth. Lay the pie pan upside down in the center of your crust.

Place your fingers of both hands underneath the cloth, grasping the edges and invert the whole thing, all together.

I use the third method because I think it is quicker. It is easy and more accurate in centering the crust.

It also helps prevent excess handling of the dough.

In all three methods avoid pulling or stretching the dough when transporting.

That could cause the dough to shrink away from the sides of pan during baking the crust.

How To Bake Crust

Flute the edges using your fingers or crimp the outer edge with the tines of a fork.

Prick the bottom of crust. Bake in a preheated oven 425F. 12-15 minutes until lightly browned.

If making a double Flaky Pie Crust pour your prepared filling into the first crust and place the second crust on top.

Fold edges of second crust under edges of first crust and flute or crimp around edges to seal.

Prick or slit center of crust. Bake according to directions in your recipe. 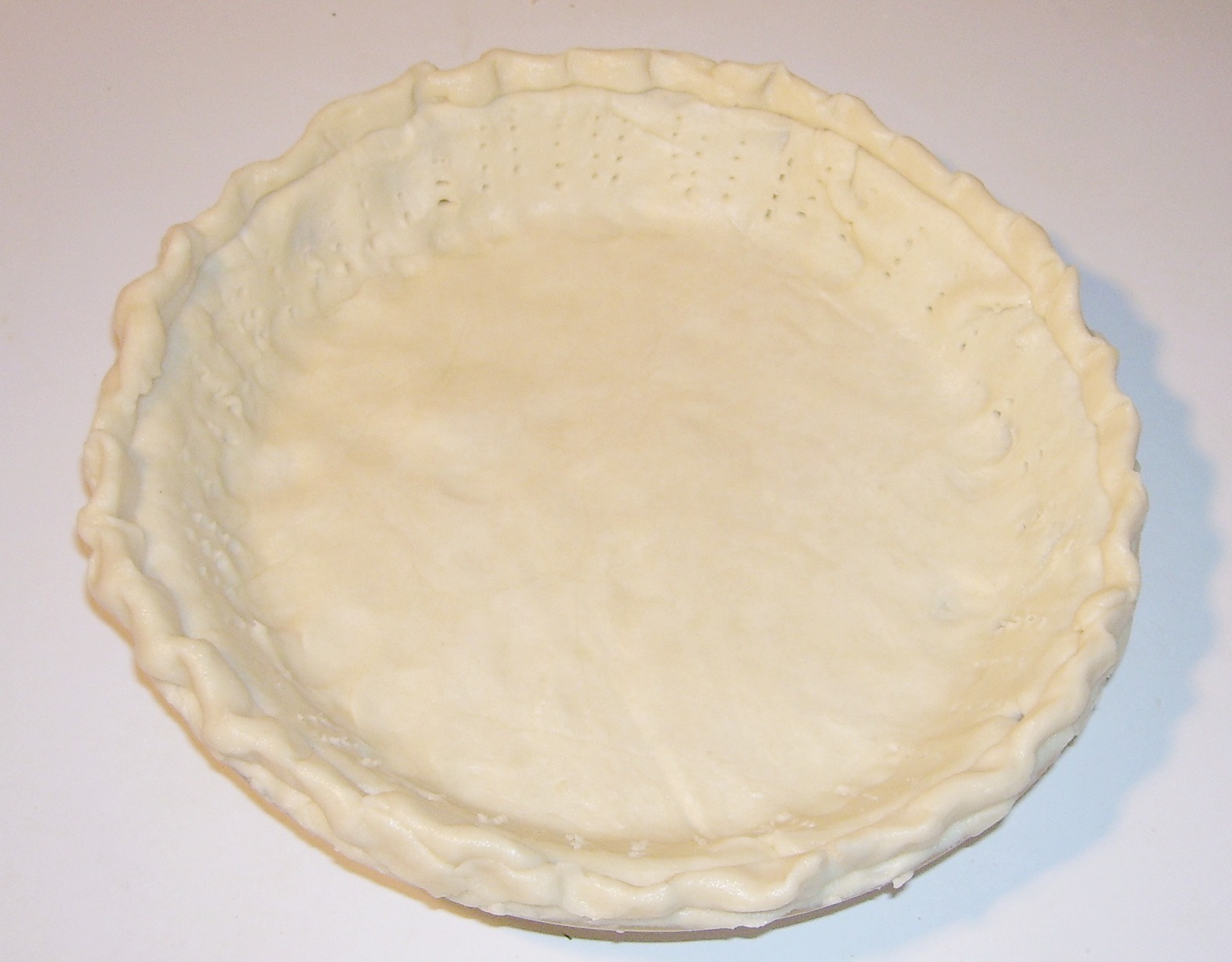 Sift together sifted flour and sugar into a medium size mixing bowl.

Cut slices of chilled butter, without toughing with hands (will warm butter too much) and drop into bowl.

Using 2 forks or wire whisk (forks work best) stir and separate butter pieces into flour until the mixture is close to the consistency of course cornmeal.

Because of the high ratio of butter fat it will be hard to get all pieces of butter the cornmeal consistency.

It will help to flake the crust, while making it tender.

Sprinkle on the water a little at a time, using the technique in the Flaky Pie Crust Recipe instructions above.

Roll the dough into a ball.

Dust the dough ball lightly with flour and place it between 2 (12' squares) of waxed paper.

Gently, roll the dough ball to the edges of the waxed paper.shaping it into a circle.

Gently peel back the paper occasionally, to check if the dough needs a little more flour dusting to prevent sticking.

DO NOT add excess flour more than needed as it will make crust less tender.

To keep the rolled dough in a circle, turn paper after each roll.

That will ensure a round and even thickness of your pie crust.

When finished rolling, peel the top paper off carefully, noting any sticking that needs to be dabbed with flour.

Place your hand under the pie crust and flip it centered onto your non-greased pie pan.

Peel off the other waxed paper.

Using your fingers, slightly lift the edges of crust and push it snugly into bottom sides of pan.

Trim around edges of crust to your liking.

If you wish to decorate the edges of crust, leave enough dough overhang.

One simple way to decorate the edges of this crust and the Flaky Pie Crust is to leave 1/2 inch overhang, fold it under all around the pan and crimp the edges with a fork.

The way I decorated this Butter Pie Crust Easy Recipe is I trimmed the excess dough from around the edges and rolled it into a small untwisted, long rope.

I then wrapped the dough rope around the Butter Pie Crust top edges.

Using 2 fingers on my left hand and my index finger on my right hand, I made stand-up scallops.

I was pleased that this produced a small decoration that browned evenly.

You can prick the bottom and sides of the crust with a fork before baking a single crust, if you prefer the finished crust to be smooth and not blistered.

Or, if you chose to let it blister during baking.

I prefer the latter choice because this recipe also makes a Flaky Pie Crust.

Bake 15-18 minutes until browned and done when checked with a fork, in the center.

The lower heat to bake this Butter Pie Crust Easy is because butter burns easy at a high heat.

With the maximum amount of butter in this recipe that means it will brown quicker and more so around the edges.

TIP: If you are going to put a filling in this crust that needs to go back in the oven, for instance, a Meringue Topping, brown the crust very lightly.

Read directions for adding cooked fillings that will be topped with meringue, especially when making Mile High Meringue.

Most of the time the filling needs to be hot when poured into crust and topped with meringue immediately so that it starts cooking at once.

The crust will cook and brown more with that second baking.

Remove finished pie crust from oven and let cool on a rack before adding pie filling.