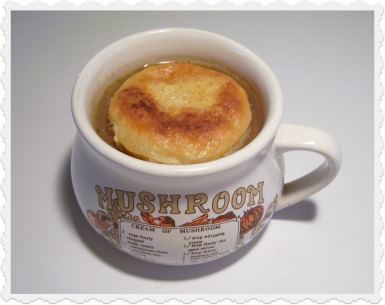 French Onion Soup recipe made on top of stove with caramelized onions and Cream Sherry.

Top with Swiss Cheese and serve with your favorite wine for an impressive meal.

No need to spend hours making this soup.

This is a great dish to make and serve immediately.

Or refrigerate it, then heat and serve just as guests arrive.


Peel and remove root and stem ends from onions.

Slice in half from stem end to root end.

Slice each piece of onion making thin half circles.

Stir to coat all pieces with butter.

Cover and cook 10-12 minutes until until the onion changes color and browns lightly, stirring every few minutes to prevent sticking.


Uncover and stir in Cream Sherry and saute until onions are caramelized and tender.

Takes about another 10-12 minutes.

Takes about another 10-12 minutes.

Remove onions from skillet with a large slotted spoon and place in a medium size saucepan, leaving as much of the drippings in the skillet as possible.

Sprinkle the flour and salt over drippings in saucepan and stir to make a paste.

If the flour wants to clump it means you need a little more oil.

If it does, add the 2 extra teaspoons of butter and stir it until the mixture is lightly brown as if you are making a gravy.

Slowly stir in the broth.

If using canned broth, add enough water to the broth to make 4 cups.

Stir and cook until sauce thickens slightly and comes to a boil.

Heat until all is piping hot and turn off heat.

Cut slices of French bread to fit in top of soup or serving bowl.

Cut Swiss Cheese to fit on top of bread, but slightly smaller size.

The bread shrinks a little while it is toasting.

Stir cheese trimmings into soup pot until cheese is melted.

Butter and toast each slice of bread until golden brown.

If your soup bowl is ovenproof place slice of toasted bread on top of soup.

Then place cut out cheese on top of toast and sprinkle with Parmesan Cheese.

Place soup bowls in oven under broiler to melt cheese.

If your soup bowls are not ovenproof, you will need to toast your bread and melt your cheese separately.

Butter you bread on both sides, remove from the oven and top with the cheeses.

Return French Onion Soup to the oven and broil until cheese is melted.

Carefully remove it from the oven with a spatula.

Place the bread on top of the French Onion Soup.

The cheese will be very hot.

Serve with wine of your choice, if you prefer.

NOTE: If you prefer to prepare dish to serve later, make soup and topping separate and store soup in refrigerator.

Cut toast and cheese in advance and toast just before assembling.

*Swiss Cheese that has holes, called eyes, is more pronounced with flavor, especially a nutty flavor because of the longer fermentation period.

You will taste a delightful difference in the type with eyes.