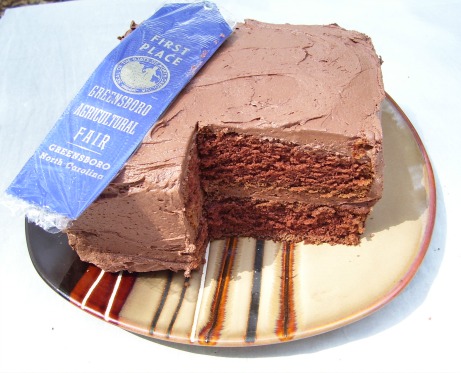 I won a Blue Ribbon for "Best Chocolate Cake" in a Guilford County cake baking contest in Greensboro, North Carolina, in the 1970s, three times in a row.

For competitions, I frosted it with Creamy Chocolate Frosting that my family liked better than the original Coconut Pecan Frosting.

The cake Judges liked it better, too.

Cream together butter and sugar.

Add yolks one at a time, beating well after each addition.


Sift together salt, soda, and flour.

Pour into three, deep 8" or 9" round cake layer pans that have been lined with parchment paper and lightly greased and lightly dusted with flower.

Can use 2 deep, square cake pans.


Let sit in pans 2-3 minutes then turn out of pan and place on a rack to cool.

Frost with Coconut Pecan Frosting, spreading between layers and on top.

Beat until thick enough to spread on cake.

Beat in sugar, adding just enough cream to make it a spreading consistency.

Beat on high speed to make it real creamy.

Bake the German Chocolate Cake Recipe as above.

You can bake the cake in three deep 8" square cake pans instead of the round pans.

Frost between, on top and on the sides of two cake layers.


I am not convinced historians know the name of the person who actually invented this amazing cake formula.

They seem to agree it was a woman and she was living in Texas.

It is known that the recipe was being circulated by newspapers in Texas and other states in 1956.

A reader submitted a recipe to a newspaper in 1957 calling for the "German's Sweet Chocolate" a trademark of General Foods Company, in the ingredient list.

Because of the resulting soar in sales, General Foods refined the recipe adding their Angel Flake Product

I don't know if General Foods invented the famous frosting or it already existed and they just added their brand of coconut.

The recipe was printed on their German Chocolate label the same year, 1957.

General Foods had already named their Chocolate bar after their employee who developed it, Samuel German, in 1852, more than a 100 years prior to the cake recipe becoming famous.

In 1958, while I was working with Southern Bell Telephone and Telegraph Company in North Carolina, an employee and a good friend, brought the cake to work to share with us.

It was so delicious, I asked for the recipe.

After making the cake I was disappointed with the results.

Since the address and recipe was on the German Chocolate Bar label, I wrote a letter to General Foods explaining my disappointed  results.

I promptly received a reply with a numbered list of steps to follow to ensure baking the perfect cake.

I followed those German Chocolate Cake Recipe steps, explicitly and did indeed bake the "perfect cake".

I wish I had saved that letter.