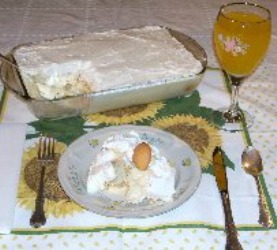 
This method renders fresher banana taste because it isn't cooked in the oven to brown as is meringue topped puddings.


Pour water into a large saucepan. Stir in flour until smooth.

Add eggs, one at a time, mixing well after each addition.

Cook, stirring constantly (to prevent sticking), until mixture is thickened to the consistency of a thick gravy.

The mixture will start steaming and produce a few bubbles, which indicates it is about thick enough.

Place a layer of vanilla wafers in the bottom of an 8 inch by 11 inch oblong or 2 quart baking dish**.

Top each wafer with a 1/4 inch slice of banana.

Pour a layer of pudding onto wafers and bananas.

Repeat layers again until pudding is used up.

Refrigerate for several hours or overnight.

This allows the pudding time to set up properly and the flavors to permeate.

However, many wafers have been reduced in size recently, requiring you to use more.

My homemade Vanilla Wafers (link in recipe) can be made the size you like, including the diameter and thickness.

They contain butter that gives the wafers  not only a buttery taste, but more moisture.

Use equal amounts of banana slices, wafers, and pudding mixture as you layer your pudding and you it will come out perfect every time!

For an attractive and special presentation, layer pudding in a trifle bowl instead of an oblong pan.

For an extra smooth pudding, use a whisk to stir and mix as you blend the ingredients. together.

This next Banana Pudding With Meringue Topping recipe is the one that others and myself took to family reunions and all day church services.


I personally like whipped topping on mine, but this website is about those delicious good old recipes from scratch, we remember so fondly.

In a medium saucepan place the cornstarch.

Add a small amount of milk to the cornstarch and stir until smooth.

Stir in sugar, salt and rest of milk.

Turn on medium heat and stir mixture until it starts to simmer.

Cook 1-2 minutes more until it is has thickened.

Cover with lid or plastic wrap.


Let sit until butter has melted.

While waiting for butter to melt, place a layer of vanilla wafers (bottoms down) in  2 quart glass baking dish or casserole dishy.

Top each wafer with a round slice of banana.

Stir melted butter in warm pudding and pour 1/3 of it over vanilla wafers.

Cover with plastic wrap to keep warm and prepare meringue.


Slow beat in sugar until all is gone.


Watch carefully and Do Not Over Beat.

If you see the slightest sign that you meringue is shrinking... stop.

Spread meringue on top of warm pudding, sealing the edges to help it from shrinking.

Bake in a preheated oven 375F. until lightly browned.

Remove from heat and let cool on a cooling rack away from any drafts.

When completely cooled, refrigerate as per the Old Fashioned Banana Pudding Recipe at top of page.

To help bananas from ripening too soon and turn brown, remove them from plastic or paper bags immediately.

Place them on the tabletop or in a bowl out of direct light.

Do not store bananas in the refrigerator.

Bananas are kept at 58F., much higher than your home cooler, during shipping to prevent ripening.

To prevent the slices from turning brown, dip them in lemon or lime juice.

For less citrus taste, place the slices in a mixture of 1/2 cup cool water and 2 tablespoons lemon or lime juice for 3 minutes.

Here is a comment a visitor, Patricia Lloyd, tweeted on Twitter after she made this delicious Old Fashioned Banana Pudding Recipe.

I hope you enjoy her comment and picture of her pudding.


"Testimony here for how good this banana pudding is! I made it and believe me ... it didn't last long! Used separate containers for hubby and me to make sure I got my half." 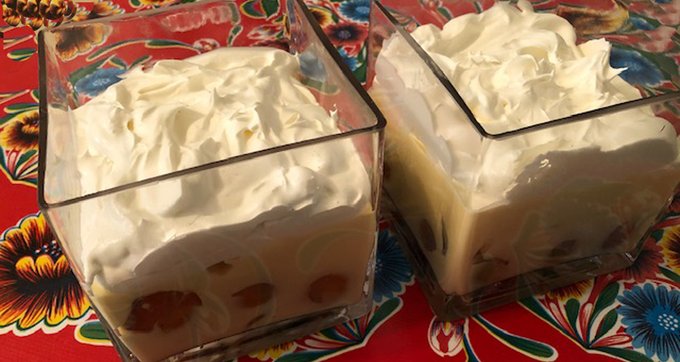