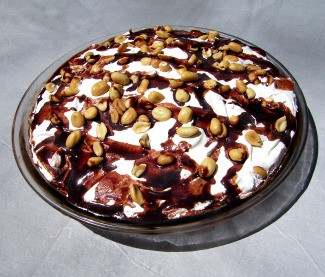 This recipe came from ladies in my employ over 30 years ago.

They ate lunch daily at a restaurant because this delicious pie.

One day after lunch they came bubbling through the door.

They had jokingly ask for the recipe and to their surprise got it.

I added the topping of whipped cream, chocolate sauce and nuts.


Cream together cream cheese and peanut butter in a stand mixing bowl medium speed* until smooth.

Reduce speed to low and add powdered sugar a little at a time.

This prevents the sugar from flying everywhere.

Pour mixture into your graham cracker crust, spreading it  evenly and mounding slightly in the center.

Spread the rest of the whipped cream over top of pie, mounding slightly in the center.

The mounding is for aesthetics, only.

Place pie in the refrigerator to chill several hours before serving.

The flavors will blend and the pie will cut better.

You can freeze this pie.

Remove from freezer and let it thaw enough to cut before serving.

The colder it is when served, the more like an ice cream pie it will taste.

For a lighter, fluffier pie with more volume, beat on high speed.

You may substitute a Vanilla Wafer Crust.

Make according to the Vanilla Wafer Crust Recipe.

Make the whole Chocolate Sauce Recipe ahead of time.

Stir the sauce often to prevent it from sticking because of the milk.

Let the sauce cool and refrigerate for at least and 1 hour to chill.

You can make the sauce the day before to save time when making the pie.

Divide the Chocolate Sauce and reserve one half to use later.


It will last several days, stored in a  jar with a tight fitting lid in cool refrigerator.

When ready to make your pie, make the Vanilla Wafer Pie crust and set aside.


Prepare the filling in a stand mixing bowl as in the above recipe.


When the Chocolate Sauce and Peanut Butter filling are ready, fold them together in the mixing bowl.

Beat on high speed for about one minute and pour into your Vanilla Wafer Pie Crust.

Chill for 1 hour or longer before serving.