The world loves pies. Folks have been baking them for hundreds of years.

Our Pilgrims loved them so much they brought their favorite recipes, which consisted mostly of the mincemeat pie with them.

They discovered how to make fruit, vegetable, custard and cream pies, using the foods American Indians taught them to eat.

Here you will find an Old-Fashioned Pumpkin Pie that was featured in the Good-Housekeeping magazine, November issue, in 1937.

The pie has been the winner of polls I have done online asking fans if they prefer pies or cakes for desserts.

I found it amazing that all such polls resulted in the the same results.

So, whip up a favorite traditional pie in our delicious, homemade Flaky Pie Crust from scratch or other no bake crusts and make any meal, a special occasion for your family and friends!

Banana Cream Pie
One of the Best Cream Pies you will taste!

Full of bananas in a Chocolate Graham Crust, Whipped Cream and Chocolate Curls!

Easy Apple Pie
An old fashioned recipe that is not sweet, not too spicy and baked in a deep dish flaky pie crust.

It is topped with a delicious glaze of cream and sugar.

Topped with meringue and coconut and baked long enough to toast.

Pear Cobbler With Apples
Made with raisins and spices topped with a glazed crust of self-rising flour, brown sugar, butter and nuts. 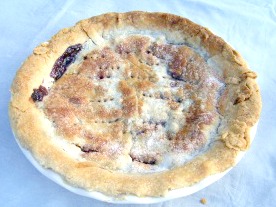 
Make the Butterscotch Pudding into a pie by cooking the pudding a few minutes longer until is as thick as a pie filling.