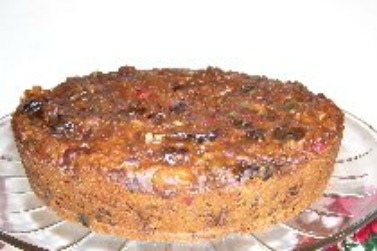 Plum Pudding Recipe is an old fashion fruitcake of the 18th century made with fruits, nuts, spices and brandy, steamed on top of the stove in a dutch oven, to celebrate Christmas.

Originally, they consisted of beef suet, raisins, currants, prunes, nutmeg, mace, ginger, and among other ingredients evolving from plum porridge, a stew-type dish that was cooked in a pot on top of the stove.

After they were cooled, they were wrapped in cheesecloth soaked in brandy, put in an air-tight container for 2 weeks to mellow.

Many recipes still list suet (beef fat) but, it's hard to find because meats most often arrive at the retail grocer, trimmed, packaged and ready to sell.


Dredge fruits and nuts in 1/2 cup of the flour. Set aside.

Stir in eggs, one at a time, beating well after each addition.

Stir spices into rest of flour and fold into creamed mixture.

Fold in dredged fruits and nuts into mixture.

Spoon into a prepared (greased and floured) tube pan* or heat-proof pudding mold.

Place in a large steamer or pan, such as a dutch oven with a rack on the bottom.

Fill the steamer with water up to halfway of the tube pan.

Place pan on medium heat and bring to a boil.

Cover with a lid or aluminum foil and steam for 2 hours or until knife inserted in cake comes out clean.

When done, the cake will start to loosen from around the edges.

Turn off heat and let cake sit about 10 minutes for steam to subside.

Let sit about another 5 minutes and invert pan onto serving plate.

Place a circle of wax paper in bottom of pan.

Grease and flour wax paper and sides of pan.

When cake has thoroughly cooled, pour 3-4 tablespoonful of Brandy on top and let it soak into pudding.

Cover or wrap cake with foil and continue to pour Brandy over cake daily for several days or a week for a moist old fashion delight!