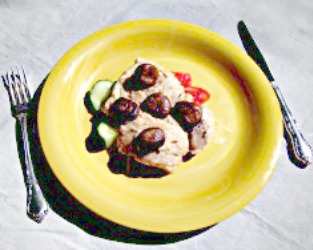 Smothered Chicken Recipe is an old fashioned recipe of chicken and gravy that I have updated by serving Sauteed Mushrooms in a Cream Sherry Sauce on top.

This. excluding mushrooms was the way Mama made it over 70 years ago, as did her mother.

Shortly after our marriage in the 1960s, my husband asked me to cook Chicken Fricassee.

I had never heard of a chicken dish by that name.

I later learned that this was one of President Abraham Lincoln's favorite dishes.

I call this Smothered Chicken or Chicken and Gravy.

Cut into smaller size pieces if you prefer because they will cook quicker.

Set aside in a colander to drain the excess water out.

Pour oil in a heavy skillet.

A cast iron skillet is great or an electric non-stick skillet like I use.

In absence of a temperature gauge, heat oil until a small piece of bread will brown in a couple of minutes after dropping it into the oil.

While oil is heating, whisk together or sift together, flour, salt, and thyme.

Place remaining flour mix into a shallow bowl or pan.

You can use a large platter.

Dredge chicken parts in flour and carefully place in hot oil that has reached correct temperature.

Let cook until brown on one side (about 8 to 10 minutes) turn with tongs and let other side brown.

When brown remove pieces to a plate or the platter that you used to dredge the chicken in.

Remove 1/4 cup of the oil for making the Sauteed Mushrooms and set aside.

Stir the 1/4 cup reserved flour into the remaining oil in the skillet until it reaches a deep brown color.

Slowly stir in the 2 cups warm water until comes to a boil.

Will be getting thick.

Stir in the chicken broth and milk.

Let come to a boil again while stirring.

Place chicken parts back in skillet.

Stir to make sure all the chicken is covered and smothered with the gravy.

Cover skillet with lid or tin foil and cook until chicken tests tender with a fork and it looks done inside.

When chicken is done it will have no pink color.

Check chicken every 10 minutes or so to make sure there is enough liquid or gravy to cover all chicken parts and that gravy is not getting too thick.

If you are using a stove top skillet to make this chicken, you can put the skillet, if it is oven safe, in a 350F oven to continue cooking.

If you are cooking another dish in the oven, cook them together and save electricity.


Pick over mushrooms removing any bad or damaged spots.

Cut the large mushrooms in half and leave the smaller ones whole so the pieces will be about the same size.

Heat the oil in a medium size skillet on medium heat until it sizzles when a drop of water in dropped in.

Cook mushrooms 8-10 minutes, stirring often to prevent sticking, until they change colors and are slightly tender.

Add Cream Sherry and saute about 3 more minutes until some of the moisture has evaporated and sauce is slightly thickened.


Turn off heat and remove mushrooms from skillet immediately to prevent further cooking.


Serve over the smothered chicken.

From researching Abraham Lincoln's favorite foods, I learned that he was a picky eater.

His wife Mary, tried very hard to get him to eat.

But he loved Chicken Fricassee, so naturally Mary made it often.


It was made much like the Smothered Chicken Recipe here.

The chicken was sprinkled with nutmeg or mace, then fried in lard.

When it was done a gravy or sauce, as some folks called it, was made in the pan and served over it.


A smidgen of sage would be a tasty addition in  this recipe, but I will pass on the President's dessert spices.