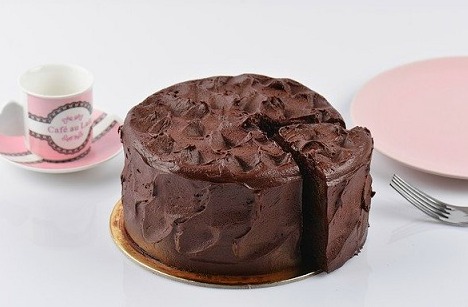 Sour Cream Chocolate Cake, is an old fashioned cake recipe made from scratch with real chocolate to give you soft texture, moisture and an ultimate flavor from the coco butter and sour cream combination.


Remove cold eggs from refrigerator and separate  the egg whites from the yolks.

Place egg whites in a stand mixing bowl and let set aside to reach room temperature before beating.

That technique gives you greater volume rendering your cake's texture softer and lighter for enhanced enjoyment.

Break chocolate in pieces put a small bowl or cup.

I use a microwavable coffee cup.

Stir chocolate until smooth and let it cool.

If chocolate hasn't quite melted by the time it gets cool, microwave it for a few seconds.

Stir until it is has melted and let cool again.

If you only have one stand mixer bowl for your like most of us, transfer your beaten whites to another type bowl and let it set while you mix your batter.

Add sugar and cream until light and fluffy.

Add egg yolks one at a time, beating well after each addition.

Slowly add cooled chocolate and vanilla. Beat on medium speed until all chocolate is blended in.

Turn to high speed and mix one minute until light and creamy.

Fold flour and buttermilk alternately in batter, starting and ending with flour mixing well until smooth.

Scrape sides and bottom of bowl.

Let set in pans 5 minutes then turn out of pan onto a cooling rack.

When thoroughly cooled, spread chocolate frosting between layers and on top.

Swirl this the back or a spoon making  a neatly finished design, if you prefer.

*To prepare cake pans before pouring your batter in, cut parchment paper in sizes to fit bottom of pans.

Grease bottom of pans with cold butter and sprinkle lightly with flour.

Grease and sprinkle with flour and shake out excess again.

Takes less than a minute.

On low speed beat in a little powdered sugar at a time so the fine sugar dissolves instead of flying out of the bowl.

If the frosting seems to get a too thick to spread, add in a little more  sour cream or room temperature whole milk.

If the frosting seems a little too thin, add a little more sifted powdered sugar until the consistency is right for you.

Sometimes there are problems with frostings being too thick or too thin, even though you measured your ingredients correctly

For instance, sour cream changes consistency (thickens) as it ages after being opened.

Even in the refrigerator.

Powdered sugar can settle a tiny bit like flour, after being opened, stored and used in a moist kitchen for a length of time.

That's why I recommend sifting powdered sugar for some recipes including this Sour Cream Chocolate Cake Recipe.

If you've visited this website many times you have probably read recipe's history on some pages.

I adore researching recipe's history and comparing them with my personal experience of growing up with those foods.

This Old Fashioned Chocolate Sour Cream Cake Recipe was intriguing to me.

Mostly, because I had never heard of it this type cake as a child, growing up from the late 1930's.

What was interesting (to me and I hope to you) was facts I witnessed at home, growing up with no refrigerator.

We had what we called clabbered milk that we used in our cooking.

Clabbered milk that I saw at home contained thick chunks that looked like what we call sour cream now (I still think it was "soured cream") with yellow specks looking like pieces of butter we see in whole buttermilk from the store.

Before our milk turned sour (claberred) the sweet cream rose to the top of the milk bucket.

The bucket was the  same one used to catch the milk as Mama milked our cow... a daily chore 7 days a week.

Our milk remained in that bucket until it was used which included churning to make butter.


Mama scooped off the separated, risen cream to churned it into butter.

We didn't have pasteurized/homogenized milk easily available back then even though it had been invented many years prior.

Canned milk included evaporated milk and condensed milk was plentiful in the 1930s and 1940's in country stores, including Daddy's own country store.

I never saw or heard the term "sour cream" in that era.

Probably, the reason I didn't know about it there was no electricity available on the highway in our part of the country at that time.

Therefore, no electricity... no refrigerators.

Here is an exact copy of that recipe:


Mix the shortening and sugar until very creamy; then add the yolks of the eggs beaten well.

Beat and add the sour cream and nuts dredged with part of the flour.

Next stir in the flour sifted with the  soda and soda and baking-powder, and salt; then the chocolate melted, and the vanilla.

Stir thoroughly and then last the whites of eggs beaten stiff.

Pour into a well-greased and floured dripping pan.

Bake in an oven registering 360F. for about forty minutes.

This makes a large cake.

The way the recipe is written is not as detailed as we write recipes today.

Yet, it is surprisingly similar.

This last recipe calls for a the cake to be baked in a dripping pan.

I am not sure what the writer meant by that pan type.

Was it something definite or was it a pan place under something to catch grease drippings or what?

I was living in the kitchen (literally in 1945 and beyond.

The folks I knew, had at least one bed in the kitchen.

I never saw a anything resembling what I call today... a dripping pan.

Many of the cooking stoves of that era had only top-of-stove cooking.

They were all wood burning stoves.

Later when I saw wood stoves with a baking oven the wood-holding compartment was attached on the side of the stove.

Cakes were cooked on top of the stove in a large iron pan (today called a skillet).

If you have any personal or researched knowledge of this subject, I would appreciate you contacting me through my "Contact Me" link at the bottom of the nav bar on the left.

Thank you for your help!