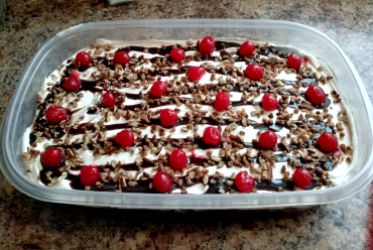 
My aunt Ella Mae Jacobs had a God given gift for cooking.

She could cook anything from scratch without recipes.

Experience is the best teacher, but she had a palate to go with all that experience.

She made the most delicious homemade cakes I have ever eaten.

She would taste the batter as she went along, adding a little of this or that until it tasted perfect.

I think one of her key secrets was that she always used real butter in her baked goodies.

She made the best fried chicken I have ever tasted, using the simple old-fashioned cast iron skillet method.


Now that I am older, I regret not spending more time with her in the kitchen.

But I would probably weigh 300 pounds if could cook like her!


The following recipe is my own, and more my speed because it's quick, simple, and inexpensive.

It tastes great and you won't have hardly any dishes to wash when it's done!

This tastes like an ice cream banana split pie recipe to me.

Basically, you will be making a banana pudding but using chocolate pudding instead of vanilla, with some chopped pecans on top to give it that banana split appeal.


I use a 2 quart storage type plastic container to make this Banana Split Pie Recipe, because that is what I have on hand and it saves space in the fridge.

But you can use what ever type of casserole dish you have that will hold 2 quarts.


In separate bowl, mix instant pudding with milk according to directions on box.

This will give a delicious chocolate favor and keep wafers from becoming soggy.


In dish, start with a layer of vanilla wafers on bottom, then top each one with a slice of banana.

Then pour 1/2 of the prepared pudding over top of the first layer of wafers and bananas.

Then repeat with a second layer.


If you are using a deep dish like I do, add some wafers and banana slices around the sides of the dish.

You want to use a slice of banana for each wafer, with the exception that you may want to top the second layer of bananas with a 3rd and final layer of wafers.

I do mine that way, and it came out just right.

At this point, because you are using instant pudding that is already cold, you can go ahead and put on your whipped topping if you wish.


The whipped cream layer should be about 1/2 as thick as the finished pudding, for best taste.

If preferred, drizzle some Homemade Chocolate Sauce over top.

Garnish with Maraschino Cherries, as desired.

Refrigerate several hours or over night.

If you are using the type of whipped topping that comes in the can, do not add it until ready to serve the pudding.

Canned Whipped will begin to melt down and become runny within minutes.


I found that out the hard way! Oops!

Don't forget to add the pecans.