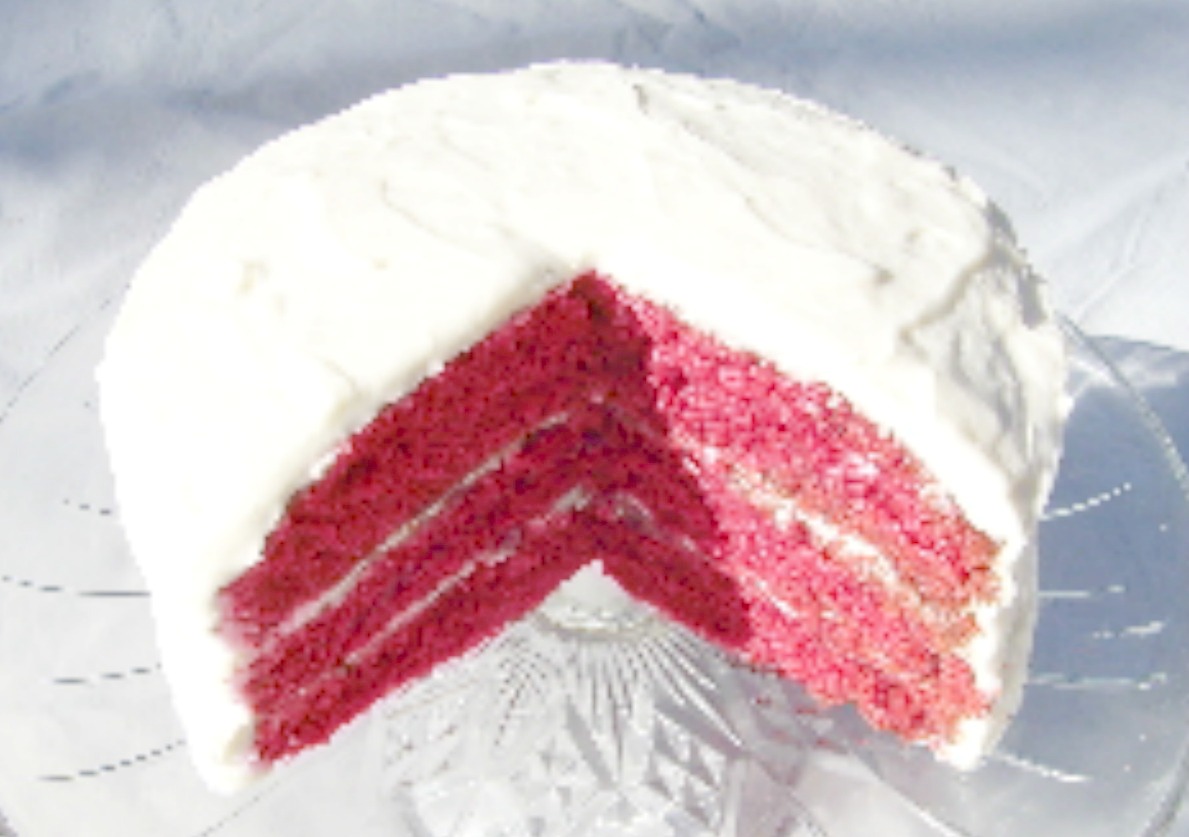 
Includes additional information on the origin of Red Velvet Cake and a recipe for  Old  Fashioned Ermine Frosting, a delicious creamy, not too sweet, type of frosting.


Many historians believe Ermine Frosting was on the original Red Velvet Cake.


There are numerous stories circulating, explaining the origin of this famous cake.


I believe the story about it originating by the owner of the John A Adams Extract Company.


The story goes that the company wasn't moving it's products too well so Mr. or Mrs. Adams came up with this recipe, using an entire bottle of food coloring.


Subsequently,  he advertised his business with pictures of this  "bright red cake" and a recipe for Red Velvet Cake containing butter flavoring, vanilla extract, and red food coloring, ingredients they sold.


Sales soared according to the legend.


Good news! A Red Velvet Cake does not need two, three, or more tablespoons of food coloring that most recipes call for, to attain that brilliant red color!


Sift together sifted flour, sugar, baking soda, and salt into a small bowl.


In a small glass container stir together cocoa powder and red food coloring until smooth.


Fold in flour mixture and continue mixing for 1 more minute on medium speed.


Scrape down sides of bowl and bottom to get any flour clinging to them.


Pour into three 8" cake baking pans* that have been greased, lined with waxed paper or parchment paper, greased again and lightly floured.


It is important that you do not overcook these delicate cake layers so they are kept moist and tender.


Turn out onto a wire rack covered with a linen or other non-terry cloth to cool.

*This cake can also be baked in cupcake tins. Line your tins with cupcake papers.

The Cream Cheese Frosting works best for Red Velvet Cake made into cupcakes.


Take butter and cream cheese out of refrigerator and let reach room temperature.


It takes less than an hour.


Cream butter and cream cheese together in a mixing bowl on high speed.


Gradually add sugar, a little at a time while beating on low speed, until all is incorporated.


Turn mixer to high speed and beat 2-3 minutes until light and creamy enough to spread on your thoroughly cooled cake.


*You probably won't need the cream or milk.


However, some butters contain a higher percentage of fat than others, affecting the consistency of your frosting.


If your frosting becomes too thick to spread easily, add a little of the cream or milk until it reaches the desired spreading consistency.


Should your frosting become too thin for you (could happen if your butter becomes too warm before you start beating it), add a little additional powdered sugar to thicken it.


The goal of this frosting is to get it to as soft a butter cream texture as possible, without it running off down the sides of the cake. Yummy!


This cake seems to have improved texture and taste the next day making it an excellent make ahead cake!


Add flour in a medium saucepan.


Slowly stir in milk until mixture is smooth and lump free.


Turn on medium heat and continue stirring and cooking until mixture starts to bubble.


Turn heat to low (to help prevent sticking) and cook while continuing to stir until mixture is thick as pudding.


Using a wooden spoon to stir instead of a wire whisk is better because it reaches all surfaces on the bottom of pan, preventing sticking.


Remove from heat, cover with a lid and let cool  completely.


Add butter to a stand mixer bowl and cream slightly.


Add sugar a little at a time, creaming after each addition on high speed.


Cream until light and fluffy and mixture is no longer grainy when tested by rubbing a little between two fingers.


Add cooled milk and sugar mixture a few tablespoons at a time, until all is added.


Continue beating on high speed until frosting is the consistency of fluffy whipped cream.


Frost cooled cake between layers, on top and sides.


Make decorative swirls on top and sides, if desired.

I currently completed extensive, in-depth research and study on the History of the Red Velvet Cake Recipe.


That research confirmed what I had come to suspect... no one knows, for sure, when or where the Red Velvet Cake Recipe was developed or invented.


I now believe the cake, as we know it today, evolved from what Mama called "Red Devils Food Cake" in the 1940s, in our household.

My earliest recollection of Mama's Chocolate Cake wasn't a cake made with Cocoa or Chocolate.


It was a yellow, vanilla layer cake with Cocoa Icing.


She never mentioned Frosting a cake...  it was always "Icing" a cake.


I didn't hear anyone call a cake "Devils Food Cake" at all  until the late 1950s in our Southern household.


According to Historians, Devil's Food Cake first appeared in an American cookbook in 1902.


In 1930 The Chicago Daily Tribune published a recipe for a recipe for Red Devils Food Cake, discussing what made the cake a desirable red color.


Their recipe did not contain red food coloring of any type.


No reference was made of Red Food Coloring.


The earliest of my personal old cookbooks to list Red Food Coloring as an ingredient is Magaret Mitchell's Mealtime Magic Desserts, Published by WEAR EVER 1951, Red Devil's Food Cake, page 37.

Add sugar, a little at a time and cream on medium speed until light and fluffy.

Add eggs and vanilla flavoring and beat on high speed until light and fluffy.


Stir together cocoa, water and red coloring until smooth.


Fold in flour and cocoa mixture alternating in starting and ending with flour.

Scrape sides and bottom and stir to mix that in.

Remove from oven and let rest 5-10 minutes and turn out on a cooling rack.

Cool completely and frost with one of the above frostings or a buttercream frostings of your choice.

It is widely touted online that the Velvet part of the name was because the cake was so soft it was named after a prevalent cake of that time, Velvet Cake.

In my research of my personal collection of dozens of cookbooks and ladies magazines with recipes spanning from 1887 to present and online, I found only 2 instances of a cake recipe by that name.


Maybe it's just me or my geographic, but I only found 2 instances of a cake recipe by that name.


One of the recipes was in the famous The Boston Cooking-School Cook Book, by Fannie Merritt Farmer, Eighth Edition, 1947, page 674, Velvet Cake.

However this cake was made with 1 1/2 cup flour and 1/2 cornstarch.

It was made by beating the egg whites separately from the yolks like many recipes instruct us to do now to lighten our cakes.

So, it looks like to me, the origin of the Red Velvet Cake, one of the best cakes ever known, will remain a mystery!